The Africa Hospitality Investment Forum (AHIF) has revealed an impressive speaker line-up for its 2022 conference. The programme features several government ministers, the Chair of Morocco’s tourism development agency, the Chair & CEO of Royal Air Maroc and a battery of Africa’s most influential hotel industry executives with the fire power to transform destinations. The event will also facilitate a by-invitation investment site visit to Guelmim, which has been described by Wanderlust as the “gateway to the Sahara” and “one of Morocco’s best kept secrets”.

The conference programme will see around sixty top executives, investors, bankers, government officials, consultants, and other experts on stage to discuss all the major issues affecting the development and operation of hotels in Africa generally, and Morocco specifically. The highlights include:

Imad Barrakad, Chairman & CEO, SMIT, said: “Agadir and the whole southern coast of Morocco has known some tremendous developments in recent years thanks to the guidance of His Majesty the King Mohammed VI as well as all the people who support and believe in the success of this enterprise. I look forward to hosting the global investment community in Taghazout very soon to show them Taghazout's success story and all the potential and the benefits the region has to offer.”

Matthew Weihs, Managing Director, The Bench, which organises AHIF, said: “I am optimistic that this year’s AHIF will spawn a high number of new deals – for the following reasons. We are meeting in person for the first time in three years; we are visiting a destination that offers outstanding potential, not only the gateway to the Sahara but also miles of virgin coastline looking west over the ocean; we are being welcomed by a country that really understands the value of tourism; we have a high concentration of major players with the firepower to transform a location; and we have an event format that will facilitate an exceptional amount of productive networking in both relaxed and formal settings.”

Delegates attending AHIF this year (it takes place on 2nd – 4th November, at the luxurious Fairmont Taghazout Bay, a five-star resort close to Agadir), are encouraged to enjoy the resort over the weekend as The Bench, the event’s organiser, is offering post-event weekend packages involving golf, surfing, yoga and other activities to entice delegates to bring their partners and extend their connections in a highly convivial atmosphere. 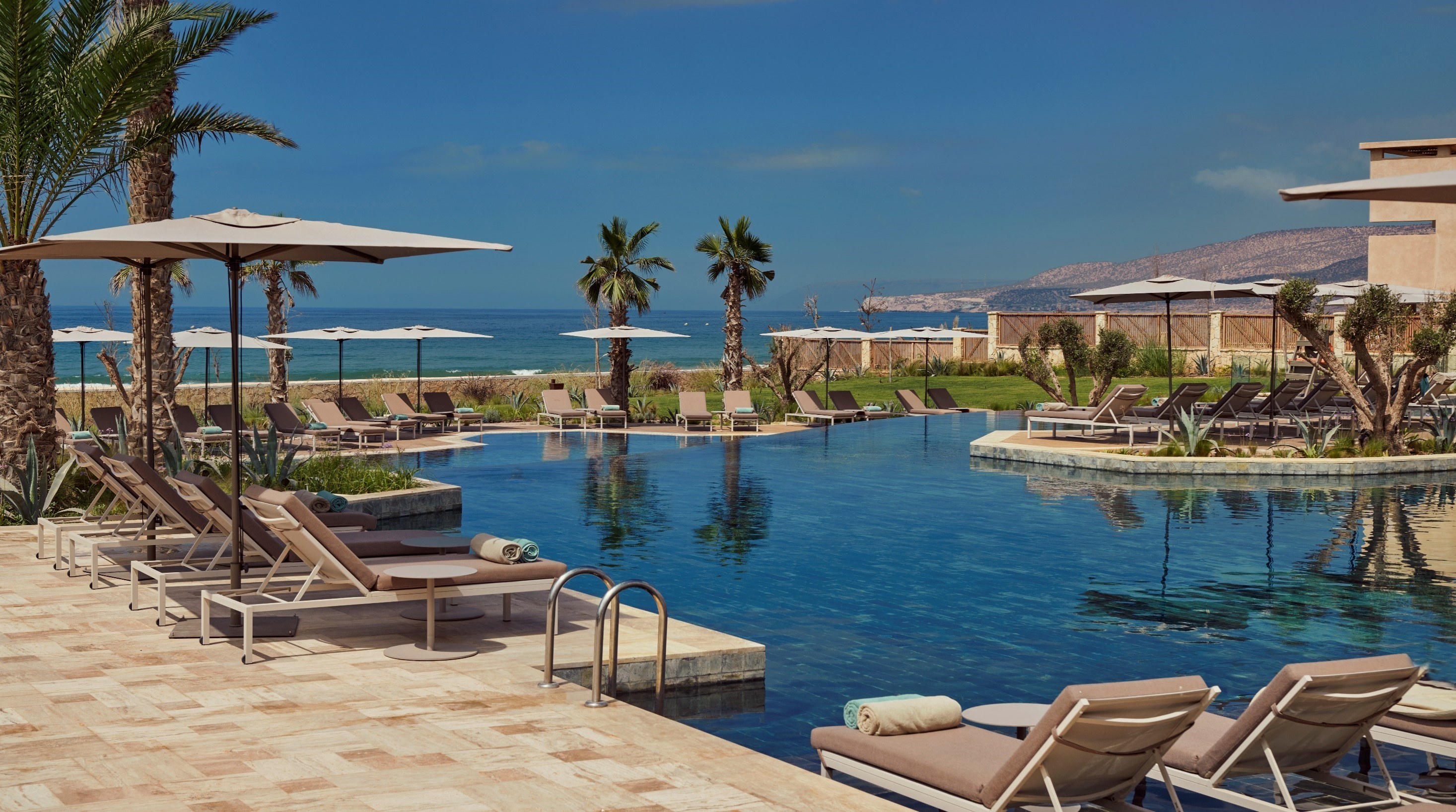 The Africa Hospitality Investment Forum (AHIF) will return as an in-person event in 2022, taking place on 2 - 4 November, at the luxurious Fairmont Taghazout Bay (pictured), a five-star resort with leisure and business facilities, next to Agadir.

AHIF is Africa’s premier meeting place of leaders in the hospitality sector, attracting hotel and real estate investors, owners and developers, global hotel operator CEOs and prominent advisory services from across the African continent and beyond. The event creates a dialogue and drives deals between international investors and hospitality owners on the whole African continent. To date, this year’s top line sponsors include Host Partner SMIT and Platinum Sponsors Radisson and IHG.

Imad Barrakad, Chairman & CEO, SMIT, said: “We are delighted to be hosting AHIF once again and showcasing the opportunities that are available for investors outside of the established cities of Casablanca and Marrakech. As a country, we are investing billions along the southern coast of Morocco and we look forward to welcoming the luminaries of the African hospitality industry to showcase the opportunities, build relationships with them and assure them that Morocco is a place they should prioritise for new initiatives.”

Morocco is an outstanding example of the benefits tourism can bring to a country’s economy and its investment attractiveness. Prior to the pandemic, the World Travel & Tourism Council (WTTC) reported that the Travel & Tourism sector was responsible for 21.2% of the country’s export revenue, $10.0 billion. In 2019, the industry was worth $14.6 billion, 12.1% of Morocco’s GDP, and was sustaining 1.3 million jobs, 12.3% of total employment.

According to the World Bank, tourism is expected to be a major driver of the country’s economy this year. In 2021, Morocco's GDP growth rebounded to 7.4%, which helped the country regain most of the output and job losses caused by the COVID-19 crisis. However, as real GDP is still 6.4% below the pre-pandemic trend it is encouraging for those looking to invest.

Matthew Weihs, Managing Director, The Bench, which organises AHIF, said: “Hosting AHIF in Taghazout will allow us to increase the networking opportunities within the event. We want to fully utilise the resort and incorporate into our programme lawn or poolside talks and activities such as golf, tennis, or yoga. In addition, to the keynote presentations and panel discussions and exhibition showcase, we will provide our attendees with a truly immersive AHIF experience. As we have realised, nothing quite matches an in-person event, when it comes to understanding the issues of the moment, assessing the mood of the market, sharing ideas and meeting potential new business partners.”

Besides hotel and destination investment, the AHIF 2022 programme will feature a broad overview of hospitality from aviation to culinary experiences, and from contingency planning to foreign investment into Morocco.

In addition to the in-person event, two virtual AHIF Marketspace events will take a deep dive into specific regions in Morocco and showcase the projects that are ripe for immediate investment. The first AHIF Marketspace will take place on 15 June (09:45 – 12:30 GMT + 1) with a focus on Guelmim Oued Noun, a city in southern Morocco, often known as the Gateway to the Desert. Boasting a new airport, Guelmim is one of the most promising beach destinations in Morocco and with an investment plan of $1.2bn by the government it is aiming to be one of the top destinations in the Kingdom.

These short 2-hour virtual events ahead of AHIF will be free to attend and provide additional touch points for the AHIF community. The projects presented will be loaded onto a secure platform with further financial and project information for investors to review and request private meetings with the project owners at their convenience. Further marketspace webinars on specific regions around Africa and the Middle East will follow, giving investors, owners, developers an online catalogue of verified and investable projects. 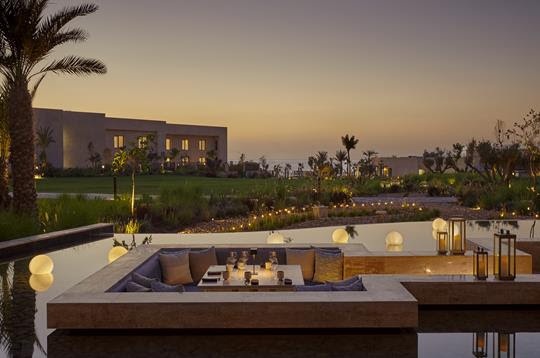 Just four words are needed to sum up the main findings of this year’s African hotel chain development pipeline survey conducted by W Hospitality Group, in association with the Africa Hospitality Investment Forum (AHIF); those words are Egypt, Morocco, Accor and Marriott.

This year’s annual survey, which is widely acknowledged as the industry’s most authoritative source, has, as of Q1 2022, a record 42 global and regional (African) contributors, reporting on a pipeline of hotel development activity totalling around 80,300 rooms in 447 hotels, in 42 of Africa’s 54 countries.

While Nigeria has 45% onsite; eight of the 15 hotels (with half of the total rooms) that have started construction have stalled, and the sites are closed.

The picture changes somewhat when one looks at rooms being planned as well as those under construction. In this approach, Egypt is the star. It doesn’t just lead the country table, with over 21,000 rooms in 85 hotels in development, up 20 per cent on last year; but it is streaking ahead of the pack. It has almost three times the number of new rooms planned as Morocco, and almost four times Nigeria, which was top of the table for many years. What’s more, with continued signing activity (20 hotels with about 5,250 rooms last year), Egypt now accounts for over 25 per cent of the total hotel development pipeline. Morocco has 7,209 rooms in development, spread across 50 new hotels; Nigeria has 5,619 rooms in 33 hotels, Ethiopia has 5,206 rooms spread across 29 hotels and Cape Verde has 4,639 rooms in 17 hotels. The next five places are taken by Algeria, 3,202 rooms, Kenya, 3,155 rooms, South Africa, 3,133 rooms Tunisia, 2,918 rooms and Senegal 2,693 rooms.

Notably, four out of the five North African countries are in the top ten; and the top ten countries represent 67% of the total hotels, and 74% of the rooms, in the survey.

While Africa’s hotel development pipeline is at its strongest ever, 80,291 rooms being planned or constructed, the top-line number masks a reduction in Sub-Saharan Africa, where there has been a greater amount of hotel investment in recent years. Of the six sub-Saharan countries in the top 10, only Cape Verde has seen an increase in planned rooms, 33%, whilst the “power houses”, Nigeria, Ethiopia, Kenya and South Africa have between them seen a decline of 29%; Nigeria is down 41%. There are three main reasons for the reduction: fewer new opportunities in the region; opening of some 2,700 rooms in 15 hotels last year, and a pipeline “cleansing” which the hotel chains do periodically to remove various projects which are unlikely to go ahead.

IHG merits comment, due to its growth of over 10%. It signed a deal for four Indigo-branded hotels in Egypt, with 650 rooms in total, as well as a 300-room InterContinental hotel in Cairo’s New Capital.

Analysis of the number of rooms under construction, as opposed to those merely being planned, changes the hotel chain ranking substantially, because Accor has only 26% of its pipeline onsite, whereas Marriott and Hilton have around 57% and Radisson 85%. This puts Marriott in top spot, Hilton second, Accor third and Radisson fourth. The top ten combined have 82% of all the rooms under construction in Africa, and the top four account for fully 66% of the total, up from 58% last year.

Trevor Ward, Managing Director, W Hospitality Group said: “The chains anticipate that 200 new hotels are expected to open this year and next, although their expectations can sometimes be over-optimistic! After a positive trend in 2019, the actualisation of hotel deals (ie: the proportion that actually opened, compared to what the chains expected to open) was less than 30 percent in both 2020 and 2021 – however, that was quite understandable with pandemic travel restrictions killing the demand for hotel rooms.”

Trevor continued: “I am not surprised by the slow-down in the number of deals signed in sub-Saharan Africa, as the past couple of years have seen not only the pandemic, making it more difficult to travel and meet new partners, but also less appetite from investors for major markets such as Ethiopia, Nigeria and South Africa. However, what does surprise me is that the majority of investment is going into upscale, upper upscale and luxury hotels, when there is very strong demand across Africa for decent quality branded budget and midscale hotels.”

Matthew Weihs, Managing Director of The Bench, which organises AHIF, concluded: “While the hospitality industry has just been through the bleakest period in my professional career, it is fascinating to see that the pandemic has done nothing to dent long-term investor confidence in hospitality. If anything, the savviest financiers have seen it as an opportunity. They have been encouraged by enlightened governments, such as Morocco’s, which have spent $ billions on new infrastructure to incentivise investment in tourism. What’s more, judging by our other conferences this year that have sold out, we are seeing how keen people are to travel again and how valuable it is to meet face to face, rather than over a video link. I am confident that when AHIF takes place on 2-4 November, in Taghazout, close to Agadir, we will see the atmosphere buzzing, with highly productive networking and with more deals announced than ever before.”

An update to the pipeline development survey, along with in-depth insights, will be presented by Trevor Ward at AHIF. The event is the leading conference of its kind in Africa, connecting business leaders and fuelling investment in tourism projects, infrastructure and hotel development across the continent.